Close to Home on the World’s Highest Road

The road beckoned. This time, on a backpacking expedition in search of an inner Shangri-La during the summer of 2011, my mission was to hitch-hike and trek the highest navigable motorway on earth. A watershed of geographical and cultural diversity, straddling Himanchal Pradesh and Jammu Kashmir in northern India, the Manali-Leh route is 485 kilometres of daring mountain passes – open for only four months a year – cutting through pristine alpine and moonscape topography.

Nestled on the upper reaches of the Kullu and Parvati valleys, my journey began in Manali. Here, according to legend, Manu, the Hindu equivalent of Noah, set fire to his boat to recreate human life after floods destroyed the world. It is also the gateway to Ladakh, affectionately known as ‘Little Tibet’; homeland to one of the last undisturbed Tantric Buddhist cultures on the planet, established over a millennium ago by medieval pilgrims and kings.

‘’You’re pretty brave to be doing this! Should’ve just taken a bus!’’ A jovial German engineer jested as he hauled us up the Rohtang La, at 3978m, the first major pass enroute to Leh. ‘’What’s life without a little adventure?!’’ I quipped, as the seasoned Mitsubishi rover sloshed through an icy glacial stream. Grateful for a head start I pitched camp alongside a giant boulder and was soon huddled beside a roaring fire, clasping my steaming thermos and gazing spellbound into the starry night sky.

Yearning to veer of the gringo trail, here I was…at the mercy of the moment, the wind at my back and in the presence of majestic Himalayan peaks, colossal custodians of a timeless realm.

Several unforgettable days followed. I was welcomed by wide-eyed, maroon and gold clad monks to stay in cliff-perched monasteries, gompas, where I attended morning puja ceremonies filled with bellowing recitals of Buddhist sutras by lamas in baritone.

The warmth of the Ladakhi people was something to behold, epitomizing lovingkindness and peace. Along the journey I caught rides in military trucks, tractors, fruit pickups and private jeeps, on passage north toward the snowy Silk Road frontier lands at the extreme edge of China and the Indian subcontinent. 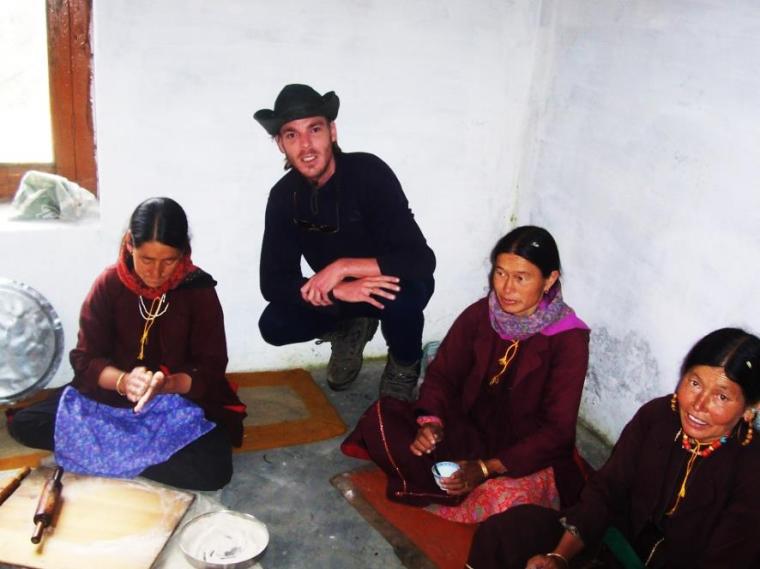 Having averaged an altitude of 4000 metres above sea level, at the climax of my epic I climbed to the highest elevation on this extraordinary path, Tanglang La pass at 5,328m, where I met fellow intrepid travellers, ecstatic to be in such a magical place.

In a tented dhaba we sipped yak butter tea and reminisced over stories about shoestring adventures in far-flung corners of the globe as the horizon melted from mauve to midnight blue.

At last in Leh, at the Shanti Stupa, I sat awestruck at murals and statues of Maitreya, the future Buddha, and Avalokitesvara, the thousand-armed god of compassion, and reflected on the stunning trip I had taken.

Thousands of miles from home, high on the Tibetan plateau, I realized that home is not where you live, or even where you are born, but is the quintessence of your true self.